Zeitgeist Fairy Tales is a series where I explore the objectification of the female form in old Hollywood musicals, particularly ones choreographed by Busby Berkeley.

According to IMDB, Berkeley was one of the greatest choreographers of American musicals, as well as being one of Broadway's top dance directors. He gained fame in the 30's, when the Hollywood Musical hit a home run. But contrary to what is portrayed in these films, the 1930s was an era of political and social turmoil combined with grinding poverty from a persistent worldwide depression. These films were an escape from that reality, but at what cost?

Berkeley saw the camera as a way to give audiences the vantage point they’d always wanted: of countless beautiful women, with close-ups between a dehumanizing queue of spread legs. His revolutionary camerawork objectified the female figure by abstracting it into large patterns. I want to reclaim those female figures, thereby changing the context. To me, Berkeley was an example of the mentality of the time. Not only did he exploit the female form but he appropriated many aspects of American culture, as will be seen throughout the rest of the series.

My process was to appropriate snippets of his work. I then deconstructed them, edited them, manipulated them, created music for each piece, and then reconstructed them, making my own mini musical. As I worked through each of the individual pieces I realized how much more complex the issues around exploitation and appropriation are, and I wondered what kind of Zeitgeist we are looking at. 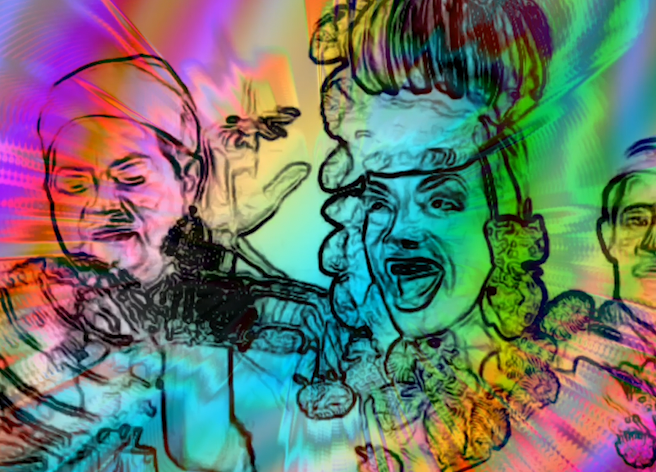